Create unique web buttons with Sothink Flash Menu. These buttons can be used for navigation bars as well as buttons throughout a website. In this tutorial I will show you how to create a unique web button. Remember that the colors that are provided in this tutorial are just for this example, you can try a lot of different colors/gradients etc and get some very unique styles.

Sample web button of this tutorial:

1. Rollover state. The rollover state of a button is the new appearance it adopts when the mouse moves over it. Typical rollover state features include: colour change of text and background, underline. The rollover state is the simplest and most basic feature for any menu, and yet, strangely, for some technologies it is very difficult to achieve, javascript menus (also known as DHTML menus) require tortured code for this, because for years almost every browser version needed different code for this. Buy a DHTML menu, and it may not even do the rollover state properly in all browsers. For true java, on the other hand, there are no such problems. True java web buttons really will give you reliable rollover states.

2. Image buttons. The next key feature to think about when choosing a web button is images. Does your chosen menu have the ability to read in images (GIF's, JPG's) which you have designed yourself, and turn these into attractive buttons? Many web developers have difficulty with images, so you may need to see if the product of your choice comes with a good set of images for you to choose from. But if your skills include graphic design, look carefully at the options for using your own images.

4. Press-in effect. You can obtain menus which have more states than just a rollover state. Do you want your buttons to "press-in" when clicked? Or do you want them to have an "active" state showing that the hyperlink in question is the current choice and current page?

5. Multiple buttons. The old FrontPage hover buttons encouraged designers to have one applet for each button! This is inefficient. Look for menus which will handle all your button needs in a single applet - arranging them in a column or bar as required.

6. Remote rollover effects. Have you seen menu items which, when you place the mouse over them, cause changes elsewhere on the page, such as instantly exchanging one image for another? Advanced web buttons may have the capacity to trigger changes elsewhere on the page when rolled over. If you want this feature, look for java buttons which support user-definable onMouseEnter and onMouseExit events.

Launch the web buttons builder, and then you will see the following Startup window. Choose "New horizontal menu".

You can customize properties for the web buttons from the Tasks panel:

Choose "General" from the Tasks panel to add text.

Now the web button is as follows:

Choose "Font" from the Tasks panel to edit font for the entered text.

Choose "Background" from the Tasks panel to set background color.

Choose "Icon" from the Tasks panel to add appropriate icon for the web button.

Now the web button is as follows:

Choose "General" from the Tasks panel, and then enter the link URL in the "Link" field.

Now you can click the "Publish" button from the toolbar and follow wizard to publish the created web button. 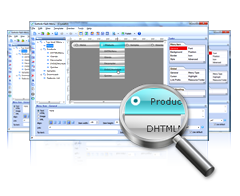